By definition, a quilt is a coverlet or blanket made of two layers of fabric with a layer of cotton, wool, feathers, or down in between, all stitched firmly together, usually in a decorative crisscross design. The top layer may be a single piece of fabric, or it may be a made from a variety of scraps of material that were pieced together to form blocks, that are then sewn together to make the top layer.

When one thinks of pieced quilts, pioneer women automatically come to mind. This group of women often had to move, start new households, and work with what they had on hand. Their quilts would have been used daily, made and patched to last through the rigors of pioneer life.

For example Deborah and John Pieratt, featured in the first book of my Trail of Thread series, left Kentucky in 1854 when the Territory of Kansas was formed. They were part of the thousands of families that packed wagons and headed west for the promise of a new life. Quilts would have been used for bedding—in the wagon or on the ground, as a hanging shelter, or as a partition for privacy. They were also used for burial of loved ones along the trail.

Thimble of Soil, the second book in the series, features Margaret Ralston Kennedy. She was a widow who moved with eight of her thirteen children from Ohio to the Territory Kansas in 1855. She was dedicated to the cause of the North, and helped with the Underground Railroad in both Ohio and Kansas. It is possible that some of the quilts she made had special blocks giving direction to runaway slaves.

Orphaned Maggie Kennedy, portrayed in Stitch of Courage, the last book in the series, followed her brothers to Kansas looking for a better life as the states fought out the history of the Civil War. Women made and gave quilts for the soldiers to use during their journeys and battles.

What was the meaning for all these quilts? They were all just fabric to provide warmth and protection, but they also connected the hearts and souls of the past, present, and future.

The young woman on the trail packed quilts to use, but also to bring memories of her family left behind to her new frontier home.

The older woman—who stitched directions in her quilt that hung outside to air— gave freedom to people trying to escape a bad life.

The soldier wrapped in a dirty quilt, trying to keep warm and get a bit of sleep, was given the security of knowing that someone from home was thinking of him and waiting for his return.

Think of the countless hours of work and devotion it took to create these pioneer quilts. These finished masterpieces of the fingers gave a sense of accomplishment to the makers, and comfort and connection to the users.

Do you have a special quilt passed down through your family? What does it mean to you? 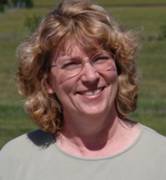 Hello from the Kansas prairie!

I’m pioneer writer Linda Hubalek, roaming the Internet—via my laptop—on a WOW! Book Blog Tour. Because my Trail of Thread book series weaves stories and quilts together, the Quilting Gallery is a perfect stop to tell you a little bit about the series.

I’ve written ten books about pioneers; about women that forged trails and built homesteads during the 1860s to the 1910s. These main characters were my ancestors who decided to make the Kansas frontier their home. A woven mixture of facts and fiction, you’ll be drawn into their pioneer stories. 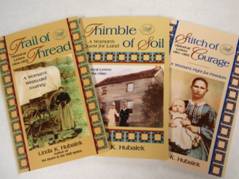 Quilts and quilting seemed like a perfect theme for the stories of my mother’s side of the family after my mother told me the story behind one special quilt she’s had since she was a teenager.

In 1938 my mother’s great aunt Martha Pieratt gave her a quilt. At that time the quilt was over 100 years old and had been handed down through her mother’s Kennedy family. Doing some research on it while planning my Trail of Thread book series, it turns out to be the Cleveland Tulip pattern and it traveled with Martha’s mother Maggie Kennedy when she moved from Ohio to Kansas in 1858.

So I wove a quilting theme into the titles and the Trail of Thread book series by featuring twelve quilt patterns in each book.

My Trail of Thread book was about my ancestor Deborah Pieratt’s wagon trail journey to the Territory of Kansas in 1854. The second book, Thimble of Soil featured Margaret Ralston Kennedy’s decision to move her family from their safe Ohio home to the unsettling territory in 1855. And the final book in the series, Stitch of Courage, followed Maggie Kennedy Pieratt during her young years as she marries James Monroe Pieratt during the Civil War.

Next Quilting Series by Linda Hubalek

As I work on my fourth series, The Kansas Quilter, I’m taking a closer look at the family quilts that my great grandmother Kizzie Hamman Pieratt made during her ninety-seven years.

I think of the time it took to make each quilt, the preparation, the cutting of the material, the hours sewing the blocks and then quilting all the layers together. And who helped her put them together? What conversations passed across the quilt frame? What was going on in the community, state and world during the construction of that particular quilt?

These are just a few of the questions I’m trying to “stitch” together as I research and write about this pioneer woman that spent so much time making quilts. Please join me in this new “quilting” project by reading my blog and “liking” and following me on Facebook as I post tidbits and photos about Kizzie Pieratt. I think she’s a Kansas pioneer quilter you’d like to meet.

Almost all of the quilts my family used when I was growing up were made by my great grandmother Kizzie (Hamman) Pieratt, plus a few by her daughter, my grandmother, Irene (Pieratt) Akers. Kizzie was a very prolific quilter, even with raising eight kids and a farmstead to run. She made a quilt for each of her children, their spouses, grandchildren, their spouses, and all her great grandchildren, plus hand quilted other people’s quilts for part of their income.

We called the quilt she made me during the 1950’s “the postage stamp quilt” because it was made of one inch squares of material, (plus she made a matching quilt for my doll bed). The full size quilt has thousands of hand cut and stitched pieces of material in it. Someday I’ll have to count them!