(This is part of my post “Dust, manure and flies…Ellsworth, Kansas in 1873, by Linda Hubalek” that I posted today on the Sweethearts of the West blog.)

My latest book, HILDA HOGTIES A HORSEMAN, the third book in the Brides with Grit series, debuted this week. The setting of Ellsworth, Kansas in 1873, was easy to work with because it was a major cattle shipping town between 1872 to 1875.

Abilene, Kansas was famous, being the first place to ship cattle by railroad to eastern towns in 1867, but that ended in 1871 when businesses and farmers got tired of the damage and disease the herds caused in the area. 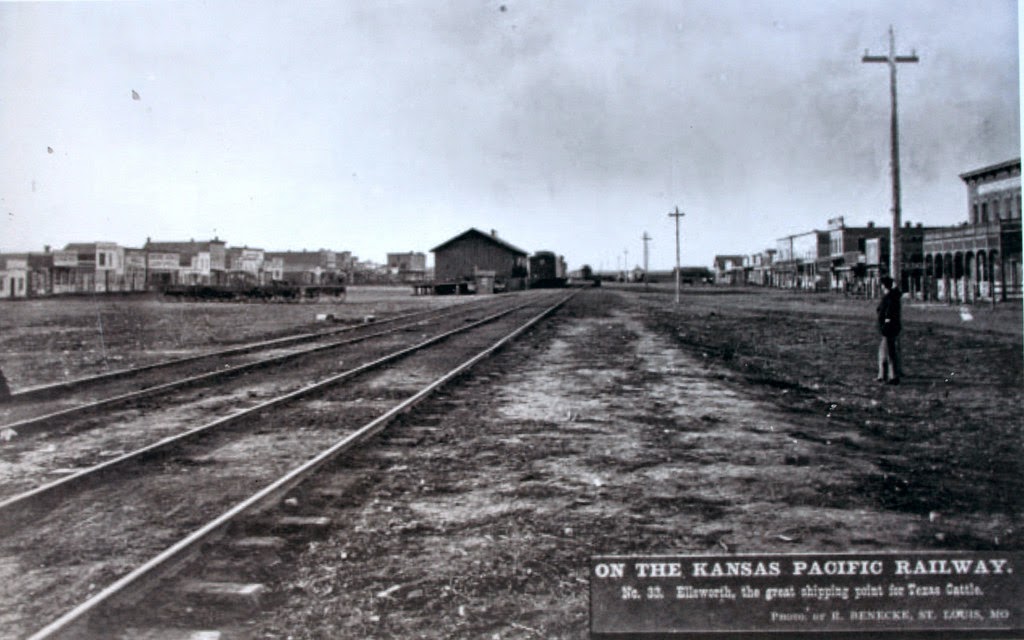 One can find a vast amount of information on the internet about the cattle drives which went through Kansas in the 1870’s. Here’s some interesting tidbits, written by F. B Streeter in 1935, for an article in the Kansas Historical Quarterly.

As a means of advertising the new trail and the shipping points on the line, the Kansas Pacific issued a pamphlet and map entitled, Guide Map of the Great Texas Cattle Trail From Red River Crossing to the Old Reliable Kansas Pacific Railway. The writer has located only two editions of this pamphlet: one issued in 1872, the other in 1875. To quote from the 1875 edition:

Drovers are recommended to make Ellis, Russell, Wilson’s, Ellsworth and Brookville the principal points for their cattle for the following reasons: Freedom from petty annoyances of settlers, arising from the cattle trespassing upon cultivated fields, because there is wider range, an abundance of grass and water, increased shipping facilities and extensive yard accommodations. Large and commodious hotels may be found in all these places, and at Ellsworth, especially, the old “Drovers’ cottage,” so popular with the trade for years, will be found renovated and enlarged. The banking house of D. W. Powers & Co., established at Ellsworth in 1873, in the interest of the cattle business, will remain at this point and continue their liberal dealings as in the past.

As stated above, Ellsworth became the principal shipping point for Texas cattle on the Kansas Pacific Railroad in 1872. The first three droves of longhorns that season arrived in Ellsworth early in June. These droves numbered 1,000 head each. Two weeks later a total of twenty-eight herds, numbering from 1,000 to 6,000 head each, had arrived and many more were on the way. The fresh arrivals contained a total of 58,850 head of longhorns. These, together with over 40,000 head which had wintered in the county, made a total of more than 100,000 head of Texas cattle in Ellsworth county.

That season 40,161 head were transported from Ellsworth, or one fourth of the total number marketed over the Kansas Pacific…Besides those shipped by rail from Ellsworth, about 50,000 head were driven to California and the territories from that place. In the months of June and July more than 100,000 head of beef and stock cattle changed hands at Ellsworth. Drovers found buyers on their arrival, enabling them to close out at a good price and return to their homes.

My first thought on reading this? Wow! That’s a lot of cattle to surround the town!

My second? Dust, manure and flies…and a good setting for a western romance…

Book 3 in the Brides with Grit series is now available!

She bought his homestead out from under him with her horse race winnings…and now he wants it back!

Hilda Hogties a Horseman the third book in my new historical western romance series, Brides with Grit, is now available on Amazon in both ebook and paperback.

This clean, sweet historical romance set in 1873, continues the story of the Wilerson and Hamner families as the meet and marry on the Kansas prairie.

Ranch woman Hilda Hamner spent her youth traveling with her Swedish immigrant family as they drove cattle from Texas up to Kansas cow towns in the 1870s. Hilda decided to get off the cattle trail and bought an abandoned homestead in Kansas with her horse race winnings. She plans on raising horses—and finding a husband that doesn’t mind her tall, lanky body that’s usually dressed in men’s clothing.

Noah Wilerson planned to bring his intended bride from Illinois back to the Kansas homestead he started for them, but found out his fiancée had already married someone else when arriving at her father’s doorstep. After traveling back home, Noah finds a woman has taken over his claim, leaving him homeless and jobless.

Hilda realizes she needs help to make her horse ranch successful, and decides that Noah is the right man—to promote from horseman to husband on her ranch—if he’ll treat her as a special woman, and not just a ranching partner.

Noah wants his homestead back, and the woman who has transformed the simple soddie into a family home. Between family dramas, outlaw danger, and butting heads, which one will hogtie the other to get to the church altar first?

Enjoy my latest story about women living and loving on the Kansas prairie!

Next in line will be Cora Captures a Cowboy. Look for it later this spring.